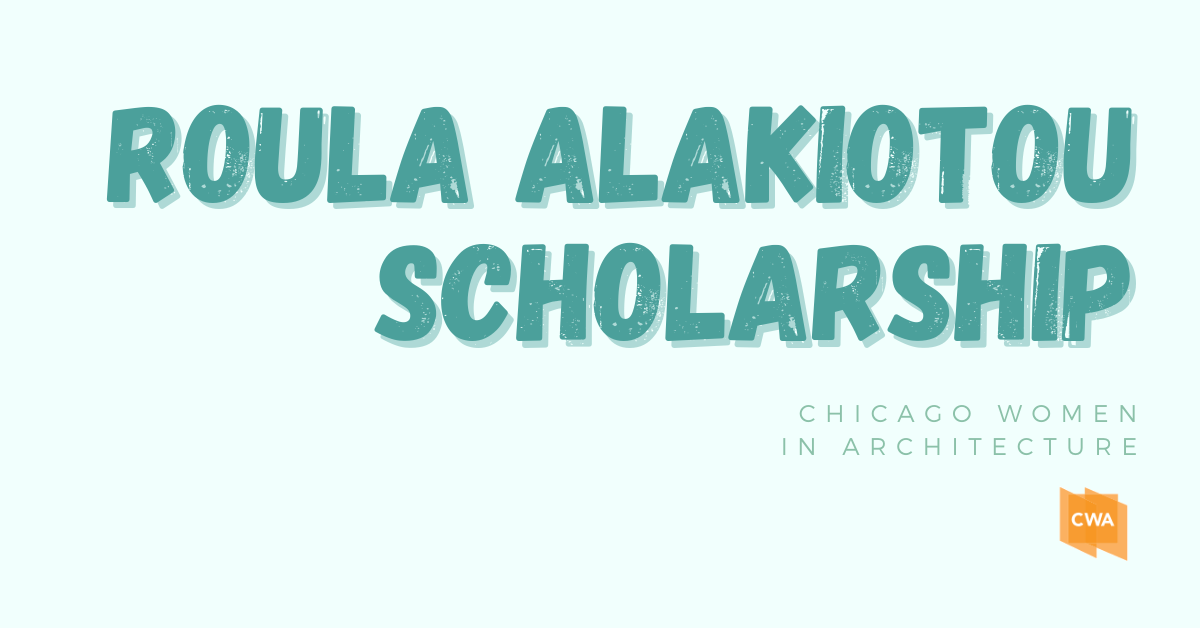 About the Roula Scholarship

Established in 2019 through the generous $100,000 endowment by Roula Alakiotou—pronounced “Roola Alah-kyo-too”—an original member of Chicago Women in Architecture (CWA), and recipient of the Chicago Women in Architecture Foundation (CWAF) Lifetime Achievement Award, this annual scholarship begins in 2021 and recognizes strong women architecture students in their final year of study for academic and leadership achievements. “With this scholarship,” Roula stated, “I intend to support the continued growth of diversity of the future for women architects,” embodying her long-standing involvement and belief in the CWA community.

The open application will be released in the fall and or eligible students are invited to apply. Applications will be reviewed by a jury including CWA Executive Committee members, officers from the CWAF Board of Directors, and other recognized architecture practitioners. With 2021 being the opening year for this scholarship, we will be awarding (2) winners this year who will be awarded at the spring CWAF Lifetime Achievement Award event, where the Roula Scholarship winner will also be celebrated. The Roula Scholarship recipients will each receive the unrestricted $5,000 award, a one-year membership to CWA, two tickets to attend the CWAF Lifetime Achievement Award event, and the winner’s credentials will be featured on the CWA website.

Applicants must be female architecture students scheduled to graduate in the academic year for which they are applying (May or December) with a M. Arch or a five-year B. Arch degree, with a minimum cumulative grade point average of 3.5/4.0, from a National Architecture Accrediting Board (NAAB)-accredited architecture program in the State of Illinois.

The inaugural Roula Scholarship application will be available in October 2021, and due January 28, 2022. The winner will be notified in February, and in May the public announcement and celebration of the awardee occurs at the CWAF Lifetime Achievement Award event. Dates are subject to change and updates will post to this page as they are available.

Roula Alakiotou, FAIA, established her Chicago-based eponymous firm, Roula Associates Architects, Chtd., in 1980 after completing her master’s with honors at the University of Illinois at Urbana-Champaign (1978). Her study of architecture began in Roula’s native Greece, at the Athens Technological Institute, and continued at the University of Illinois at Chicago, where she received her bachelor’s with honors (1975). Throughout her career, Roula has established herself as a leader in women-owned architectural firms and developed her practice specializing in large-scale public sector projects—spanning from Greece to the American Midwest. Additionally, Roula has taught at University of Illinois at Chicago; mentors international architecture students from the School of the Art Institute of Chicago; serves as a juror for many student panels and the American Institute of Architects (AIA) Gold Metal and Firm Award juries.

Roula was elevated by her peers as a Fellow of the American Institute of Architects (FAIA) in 1997. In 2018, she was named the CWAF Lifetime Achievement Awardee and was recently recognized as one of Crain’s 2020 Notable Women in Construction and Design. She is a member of the Chicago Architectural Club, the Chicago Network, Chicago Women in Architecture (CWA), and The Executives’ Club of Chicago. Previously, Roula served on the board of directors of the International Women’s Forum (IWF). She is currently on the board of the Chicago Women in Architecture Foundation.