A Message of Solidarity from CWA

Nancy A. Abshire is the 2021 CWAF Lifetime Achievement Awardee! 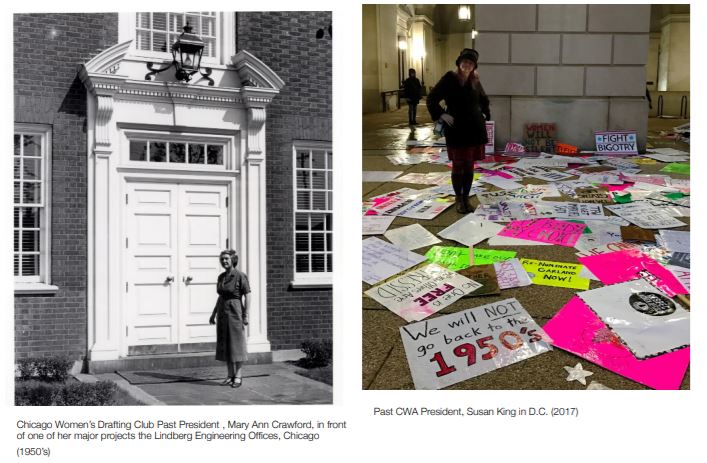 “Only girl architect lonely. Wanted – to meet all the women architects in Chicago to form a club.”
-Elisabeth Martini

So read Elisabeth Martini”s 1921 advertisement in a local newspaper. She was the only woman licensed
and practicing privately in Illinois at that time. Martini was not the first woman to practice architecture
in the area, and her ad underscores an overlooked chapter of Chicago architectural history: women
architects practicing and organizing there. Indeed the outcome of Martini”s ad was the organization of
the Chicago Women”s Drafting Club, which in turn formed the antecedent for Chicago Women in
Architecture (CWA), founded in the 1970″s, one of the longest-lasting associations of practicing women
architects in the nation today.

When “Only Girl Architect Lonely” was published in 2005 in Chicago Architecture: Histories, Revisions,
Alternatives,(1) I thought I was voluntarily closing a chapter of my life as an advocate for women
architects. That this publication was going to tie a nice bow on the package of my work as an accidental
architectural historian. I was proud of the work I had done in bringing the stories of these early
pioneering women architects to light. This was my gift to the future and now my full focus would be on
my own architectural career. 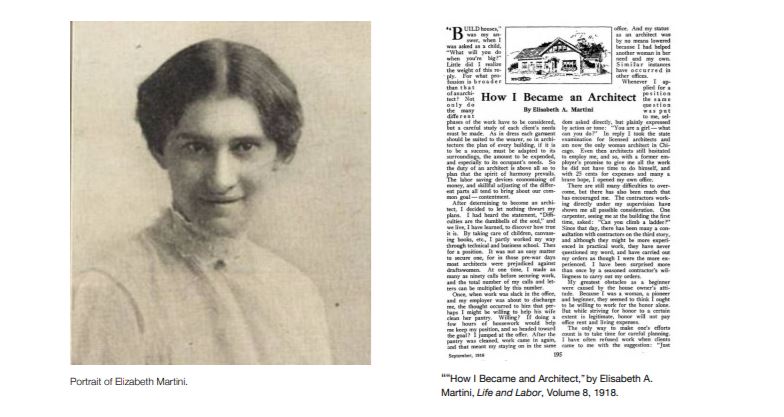 Eleven years later, we experienced the devastating outcome of the 2016 election. Suddenly I found
myself wearing an ERA(2) bracelet I bought (I thought ironically) in 2004 from a thrift shop in Boulder,
Colorado. Most of my texts in the early days of the Trump Administration were with Resistbot, the
fastest way to contact your congressperson. I found myself in Washington DC in January 2017 (and again
in 2019) marching with a million of my closest friends, fighting again for rights we thought we had
already won. Also in 2019, there was renewed interest in the Only Girl Architect Lonely essay. I found
myself being asked to speak about it again. Much to my amusement, some thought I had written it
recently.Now on the eve of the centennial anniversary of Martini”s ad, which of course follows the 100
year anniversary of our right to vote, (3) I am once again compelled to not only say something but also to
encourage us to celebrate the progress that has been made. 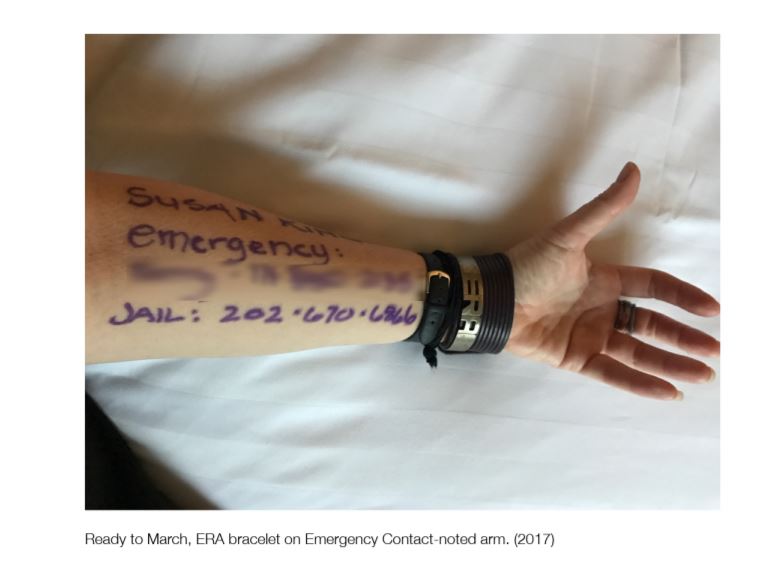 What the last four years has taught me and what I want to share with you now is best summarized in
these three points:

Diversity matters, but we have a ton of work to do.

To quote Liz Fosslien and Mollie West Duffy, the authors of “No Hard Feelings: The Secret Power of
Embracing Emotions at Work,”
“Diversity is having a seat at the table. Inclusion is having a voice. And belonging is having that voice be
heard.” I think this can be used to summarize where the architecture profession is today in regards to
gender diversity. Many of us have claimed our seat at the table, whether we have been invited or not.
However, what we often find at the table is that we now must fight to be heard in a meaningful way and
need to continue to fight for change for others. Unconscious bias is real, and it must be recognized and
it must be eliminated.

Sometimes this might seem exhausting but point number two is “Its always too soon to go home. And
it’s always too soon to calculate effect.” Rebecca Solnit, in her 2004 book, Hope in The Dark: Untold
Histories, Wild Possibilities,(4) tells the story about how one of the early protestors in the Women Strike
for Peace (WSP), which was the first significant anti-nuclear movement in the US felt “both foolish and
futile standing in the rain at a White House protest.” Years later, after the major victory of the 1963
Limited Test Ban Treaty, this protestor heard one of the most high profile activists, Dr Benjamin Spock,
speak. He shared that a turning point for him “was spotting a small group of women, standing in the rain
protesting at the White House. If they were so passionately committed he thought, he should give the
issue more consideration himself.”

In some small way I am experiencing this now with the resurgence of interest in the essay and in Martini.
First, was when I was invited last year to the “Advocating & Agitating: Women-Led Organizations” Panel
as a part of parallel programming with the “Now What!? Chicago” Exhibit at the Co-Prosperity Sphere. In
prepping for this panel I learned that Chicago Architecture book was still being published and now in
paperback! For those not familiar with the publishing world, reaching paperback is actually a way of
measuring effect. And even now, in writing this, I am finding more on Elisabeth Martini online that
others have uncovered or discovered.(5) Personally, I spent months at the Chicago Historical Society, the
Burnham Library, and even the Newberry Library in what I referred to then as my !Desperately seeking
Elisabeth Martini” days. Now, I am a footnote, and I am pretty happy about this.

Last, but in no way least, I also learned from Solnit that “danger and possibility are sisters”.  Solnit
points out that in the word “emergency” is the word “emerge.” We are at a juncture in history where
great change is possible. Let”s not go back to business as usual; let”s go forward and create the world we
want. While we have a ton of work to do, it’s so very important to celebrate the victories.
In this last month of 2020, and with what I hope is the beginning of the end of the most serious backlash
against all types of diversity (not just gender), I end the same as I ended in 2005 – with a cautionary tale
(Spoiler Alert! in case you are going to buy the book):

“Awareness of the longevity and persistence of women architects, not only as individual practitioners but
also as a continuing collective presence, continues to be an inspiration in Chicago and beyond. Yet, the
tale of Chicago women architects is also a cautionary one. While the long perspective affirms the power
of women architects to organize and succeed, it also reveals the ground still to be covered in restructuring
the profession for women architects to participate equally. As this change occurs the need for women’s
organizations may diminish, as women architects themselves are able to more easily realize their own
histories.”

As we enter a new year with a new political climate. Let us not forget the lessons of the past. Change
happens slowly. Let”s figure out to change that, to speed it up, because the sooner we can have an
equitable world the better it will be for all of us.
So yes, we have a ton of work to do, but first let”s get this party started. Cheers to Martini for bringing
women architects together a century ago!

Notes:
(1) Chicago Architecture: Histories, Revisions, Alternatives, (Now in Paperback!) can be bought here: https://www.amazon.com/
Chicago-Architecture-Histories-Revisions-Alternatives-dp-0226870391/dp/0226870391/ref=mt_other?_encoding=UTF8&me=&qid=
(2) ERA stands for Equal Rights Amendment. You know? that amendment that is so obvious that we just can’t seem to get it passed,
AND It is soooo close to being done. Sadly, sometime during 2017 when I started wearing my bracelet for real, one of my nieces, a
college graduate at the time, asked me what it stood for.
(3) Commemorating the Centennial of Women’s Suffrage by Veselka Iovanovic: https://cwarch.org/2020/03/12/commemorating-thecentennial-of-womens-suffrage/
(4) Hope in the Dark: Untold Histories, Wild Possibilities by Rebecca Solnit, was a lifeline for me when I found it in November of 2016.
Solnit had it republished as an E-Book and gave it away for free after the 2016 election. While it was originally written around the
time that I was writing “Only Girl Architect Lonely,” I only found it recently.
(5) Finding this blog by Julia Bachrach, this week, makes me so very happy. https://www.jbachrach.com/blog/2019/9/27/early-20thcentury-women-architects-in-chicago